EVE News 24:
Wednesday, 21. December 2022 00:15
This Year in EVE – Community Spotlight
This year, New Eden has been more vibrant than ever. To celebrate, we have collected some of the main achievements of the EVE community for the year. Now let’s go [...]
Imperium News:
Saturday, 14. January 2023 08:00
The Extinguishing of FI.RE?

War has returned to New Eden. In a series of announcements, both Pandemic Horde (PH) and The Initiative. (INIT) have declared war on the FI.RE Coalition, intending to end FI.RE’s reign over the south. The aggressor’s goals: the clearance of...

The post The Extinguishing of FI.RE? appeared first on INN.

Further Reporting from the New Eden Correspondents by ISD Deloro

Up to 3,800 capsuleers and about 1 trillion ISK in damages; the fight over a Keepstar in FWST-8 on October 5th YC122 was an endurance test for capsuleer and

The Monthly Economic Report for December 2022 is now available!

You can download all of the raw data used in this report here. Each image can be enlarged by clicking on it. 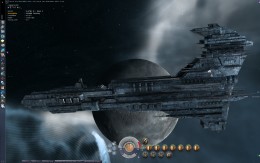